You are here: Home / Archives for FAQ

Due to less reliable postal delivery, and increased shipping costs since Covid, we are no longer shipping printed books to international addresses. International customers needing a printed book must use a U.S. shipping address.

Both international and domestic customers may immediately download eBooks after purchase. The eBook glitch with international customers has been fixed. You may print the eBook file from your home computer for your personal use. If you have any questions or experience any problems, please do not hesitate to let us know.

Thank you for understanding!

The Revelation of Jesus Christ Revealed is a soft-bound 6×9 inch book of 356 pages. The cover art is a detail from the Lamb of God stained glass window, Our Lady of Mount Carmel church, in Wyandotte, Michigan. The stained glass was constructed and installed by The Munich Studio of Stained Glass in 1915. Used by permission.

What stage / age of children is this book appropriate for?

This book is geared toward teens or adults with some background in Bible and History, although explanations, references and suggestions for further reading are found throughout the book.

Do you have a question about Revelation Revealed?
Please ask at info@nothingnewpress.com. 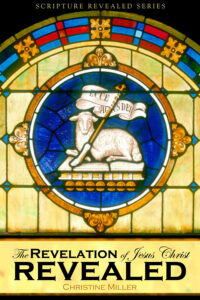 Many homeschoolers purchase the eBook counterparts of our revised Guerber histories because they are lower cost. But every single NNP eBook can be printed for use in your homeschool – they are exact replicas of the print editions. Print what you need for your family’s use!

The very first edition of Greeks that Nothing New Press published 17 years ago was merely a reprint of Miss Guerber’s original book. However, the edition currently in print is the Fourth Edition by Christine Miller. Christine used Miss Guerber’s text as a base, but has made significant changes to it, making the Fourth Edition unique – so unique, in fact, that it is no longer accurate to call it a reprint. 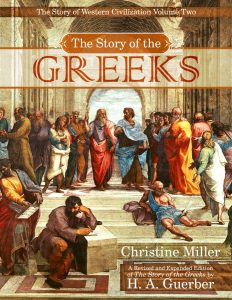 The beginning chapters of Guerber’s history were completely rewritten, with much additional material supplied. Guerber’s Greeks began with two chapters, I. Early Inhabitants of Greece, and II. The Deluge of Ogyges, in which the pre-Greek inhabitants of the peninsula were depicted as savage cave-dwellers who devoured their meat raw. In Guerber’s history, without the benefit of the advanced civilizations of the Egyptians and the Phoenicians, who sent colonies to Greece, these natives would still be wearing animal skins.

The first four chapters of Nothing New Press’ Greeks replaces Guerber’s first two chapters entirely: I. The Beginning of the Nations, II. The First Inhabitants of Greece, III. Old Greek Fairy Tales, IV. More Greek Fairy Tales. (See the NNP’s Greeks Table of Contents.) In them, the true history of the first Greeks is restored as the descendants of Japheth, the son of Noah, who arrived in the Balkan peninsula after their dispersal from the Tower of Babel. The true cataclysmic Deluge was the Flood of Noah, and these events are restored to the history, of course, especially as they related to the Greeks. Furthermore, Greek mythology is introduced as a corruption of the true Biblical history recorded in Genesis, which the Greeks, as descendants of Japheth, retained. These chapters are some of the most fascinating in the book, and bear no resemblance to Guerber’s history (download the first three chapters free).

Once this introduction of the Greeks is made, the thread of Guerber’s history is followed, but again veering from it to make corrections in several places, all of which are recorded in the Publisher’s Preface. More new material is interwoven into the narrative, especially in the chapters about the Greek kingdoms founded by Alexander the Great. Christine has added many events important to Biblical history and prophecy, which makes the New Testament more clear, but which do not have a counterpart in Guerber’s Greeks.

Do you have a question about The Story of the Greeks?
Please ask at info@nothingnewpress.com