You are here: Home / Book News / New Edition for The Story of the Romans 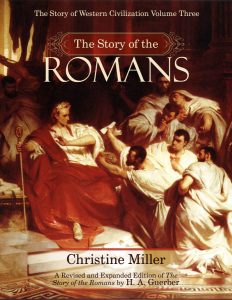 The new fourth edition of The Story of the Romans has been completely revised. In keeping with the other editions of Guerber’s histories available from Nothing New Press, the accurate history on the first settlers of Italy, previously only available in the Publisher’s Preface of Romans, has now been integrated into the first chapters. New chapters on the Roman Religion, on Herod the Great and the birth of Jesus Christ during the Augustan era, on the emperor Vespasian, and the siege of Jerusalem and the Destruction of the Temple have been integrated with the existing narrative, and surrounding chapters juggled where necessary to accommodate the new material in a smooth and unbroken style. In addition, new material has been added to existing chapters describing the growth of the Christian church and the persecutions she suffered, and the Judeo-Roman war of 135 AD, during the reign of Hadrian, which resulted in the final expulsion of the Jews from their homeland. Along with the new and expanded chapters, many more illustrations have been added, current illustrations have seen a quality upgrade if possible, and the cover is completely new!

UPDATE: The new Story of the Romans is in stock as of August 24, 2016! All orders received before this date have been shipped!

While the new editions are at the printers, The Story of the Romans is on back order until August 17. If you have already ordered the book and need to get started right away, please email us at info@nothingnewpress.com, we have a solution for you.